This tutorial explains how to view, list, activate, deactivate, add, remove, increase, decrease mount and format swap space and swap partition in Linux step by step with practical examples. Learn essential swap space management tasks including what swap space is and how swap space is used in Linux.

What is the swap space?

Traditionally Linux was developed for server system. Server systems are built to process several processes simultaneously. Sometime some process may use more than expected memory. For example a university website which is hosted in Linux server system may consume more memory on the day when exam result is announced. This kind of memory spike is very common in server system. Any service may use more memory in its peak time. Linux uses swap space to deal with the shortage of physical memory. The swap space is the space of hard disk that can be used as the memory.

In round-robin fashion, all processes are scheduled in a queue based on time sharing technique. Further each process is assigned a quantum
(allowed CPU Time slot). If process is not finished in allowed time slot then it will be terminated and resumed next time when this
process gets its next time slot. For example, if the time slot is 100 milliseconds, and job1 takes a total time of 250 ms to complete,
the round-robin scheduler will suspend the job after 100 ms and give other jobs their time on the CPU. Once the other jobs have had their
equal share (100 ms each), job1 will get another allocation of CPU time and the cycle will repeat. This process continues until the job
finishes and needs no more time on the CPU.

Suppose there are two processes running. Both processes are assigned memory pages. CPU is processing process one. Following figure illustrates this scenario. 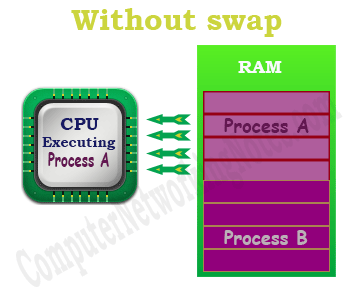 As we can see in above figure, no memory pages available for another process. System will not start new process until any existing process is finished. Swap space can improve this situation a little bit. If swap space is configured and RAM is filled, idle pages will be moved in swap space. 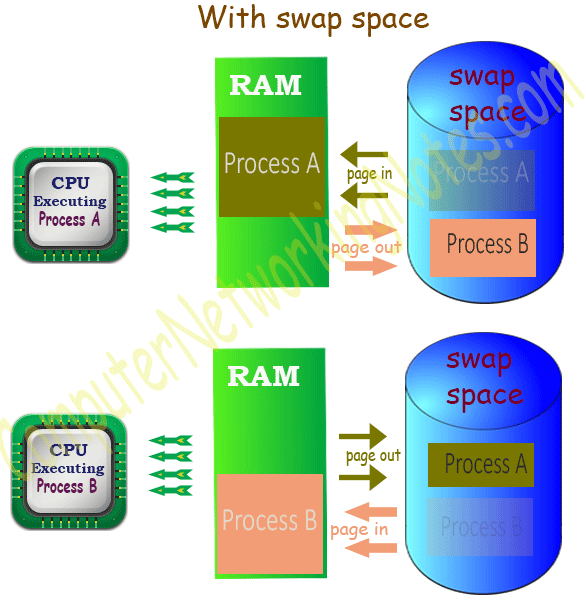 This tutorial is the fifth part of our article “Linux Disk Management Explained in Easy Language with Examples”. You can read other parts of this article here.

How to create swap partition

We can create a new partition or can use free space from existing partition for swap space. We will learn both methods. Let’s start with partition method.

Since swap partition is created as a regular partition,
we can use any disk utility from fdisk, gdisk or parted. Second, third and fourth part of this article explains fdisk,
gdisk and parted in detail with examples respectively. In this tutorial we will use fdisk utility to create a swap partition.

Replace /dev/sdc with your disk.

Use p command to get the overview of hard disk.

Type the partition number (or keep the default number) and press Enter key.

Type the first available sector for partition (or accept the default sector) and press Enter key.

Type the last available sector for partition. Alternatively we can use KiB, MiB or GiB units to define the size of partition.

Verify the creation of partition with p command 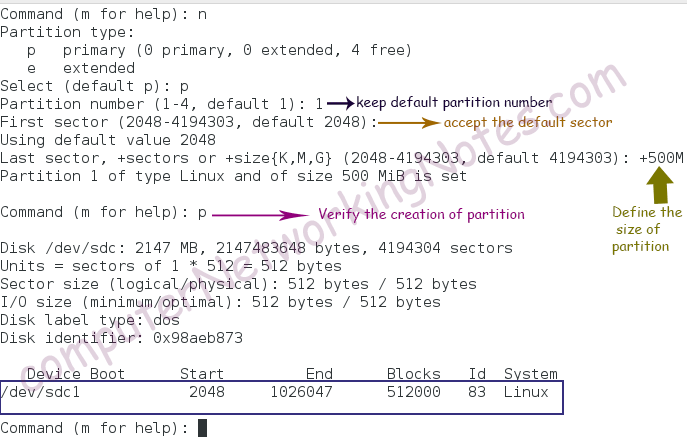 Each partition uses a special marking known as partition system identifier. This marking is used to identify the purpose of partition. To print all available partition types type l and press Enter key. 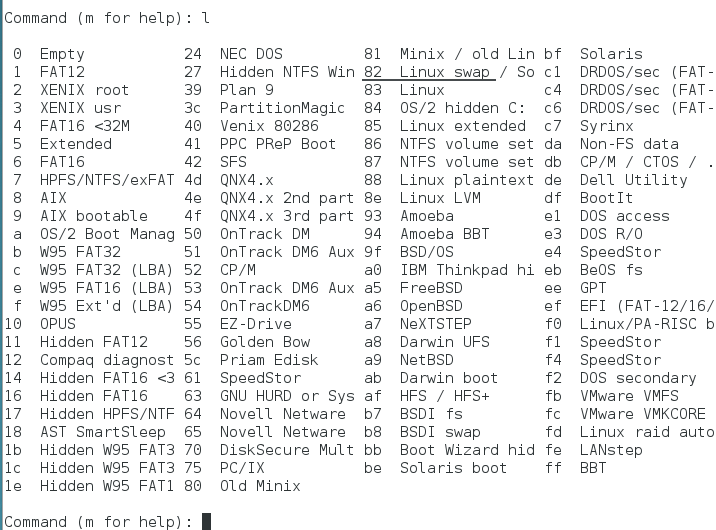 As we can see in above output value 82 is used as partitions type identifier for swap space.

Unless we change the type of any partition it is marked as Linux Standard default.

To use partition for swap space we have to change the partition type.

Verify the change with p command

The fdisk will not save anything in disk until we confirm the action. To accept the change type w and press Enter key

We have successfully created swap partition.

The mkswap command is used to format a partition for swap space. Since swap partition is never used for user data, this command does not create a file system in partition; it only applies a swap signature in partition. It writes signature in a single block of data, leaving the rest of the partition unformatted. This unformatted space is used to store the memory pages.

Now this partition is ready to use for swap space. Before we learn how to update the system about this additional swap space let’s have a quick look on two important commands which are frequently used to view the current status of swap space.

free : – This command display the current status of memory.

swapon –s :- This command display the status of swap space.

System configuration files should always be backed up before editing. Let’s take the backup of fstab file and open it for editing

Let’s updated each filed one by one.

As we know each resource in file system has a unique ID called UUID. When mounting a partition permanently we should use UUID instead of its name.

Once we know the UUID, we can use it instead of device name. We can also use copy and paste option to type the UUID.

To use copy and paste operation, open another terminal and run blkid command. Now copy the UUID of partition from second
terminal and paste in fstab file which is opened in first terminal. Once we are done close the second terminal. 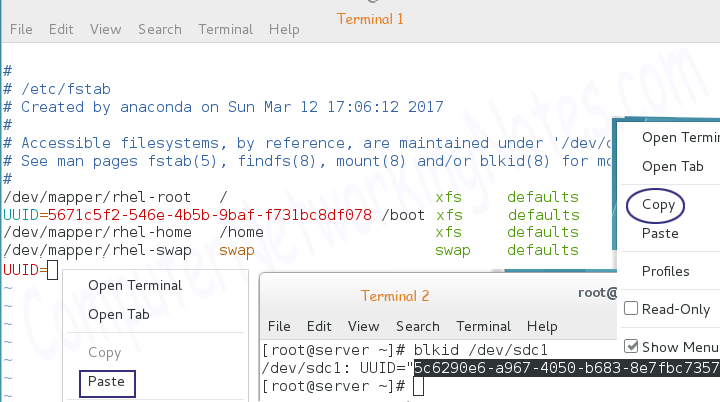 Since swap partition is used as a hardware device by system, it cannot be mounted in file system which is accessible through the directory structure. Use value swap in this filed as a placeholder value.

The file system type for swap space is swap.

Since it is used only to store temporary memory pages, disable this option.

Since it does not contain any user or system data, disable this option also.

After updating all fields save the file.

We can check fstab file entries with mount –a command. This command will mount everything listed in /etc/fstab file.
So if we made any mistake while updating this file, we will get an error as the output of this command.

If you get any error as the output of mount –a command, correct that before rebooting the system.
If there is no error, reboot the system.

After reboot we can use free and swapon command again to verify that swap partition is mounted correctly.

Above output confirms that swap partition is mounted correctly.

Swap space can be removed in following three steps: –

We took the backup of /etc/fstab file before starting this practice. We can either restore that file back or
can delete swap partition entry from current file.

Finally delete the partition and update the kernel with following steps: – 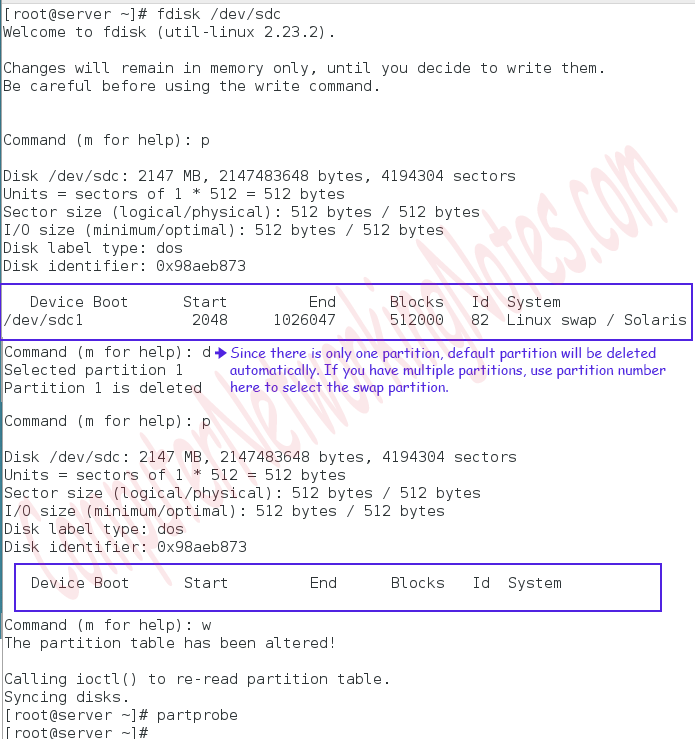 How to create swap space from file

Let’s understand this command in detail.

dd :- The dd (disk duplicator) command is used to copy or backup the low level data.

if=/dev/zero :- This is the first option. This option accepts source location as argument.
In this example I copied from /dev/zero disk file. The /dev/zero is a special file in Linux system which supplies endless zero bytes.

of=/swap-file :- This is the second option. This option accepts destination location as argument.
In this example I copied at /swap-file. The swap-file is the name of file. You can use any descriptive name here.

count=1 :- This is the third option. It is used to define the number of block which we want to copy.

bs=1 :- This is the last option. It is used to define the size of block. 1M stands for one megabyte. 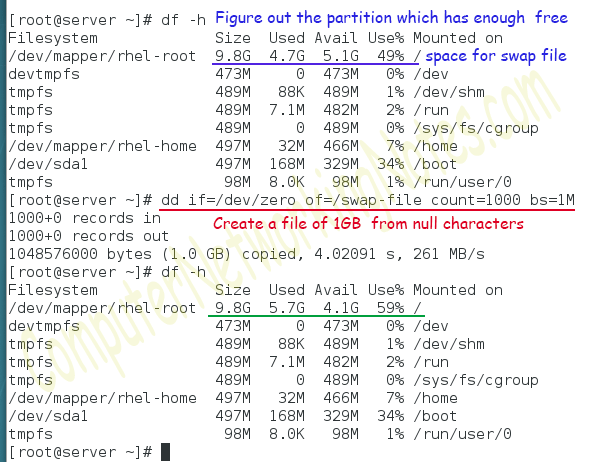 We can also verify the size of swap file with du –h command.

Since this file is created with null characters for memory pages, we cannot read its content with regular commands.

Usually there is no need to read the file which contains only null characters, but if you are still interested in reading zero bytes, use –v option with cat command or use od command. 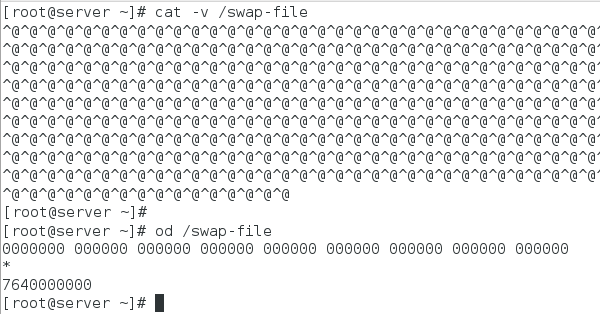 Now we can use this file for swap space. Let’s put swap signature in this file.

Since this file will be used only by system, change its permission to 0600.

Same swapon command will be used to activate this swap space also.

From performance point of view, there is no difference between both methods. From security point of view partition method is more secure and stable in comparison with file method. Since swap file is created in user accessible directory structure, it could be moved or deleted. So we should use swap file only if we do not have free disk space to create a swap partition and we have to increase swap space immediately.

To remove a swap file first deactivate it with swapoff command

We can also use free and swapon –s command to confirm the remove operation.

Now use rm –rf command to delete the file 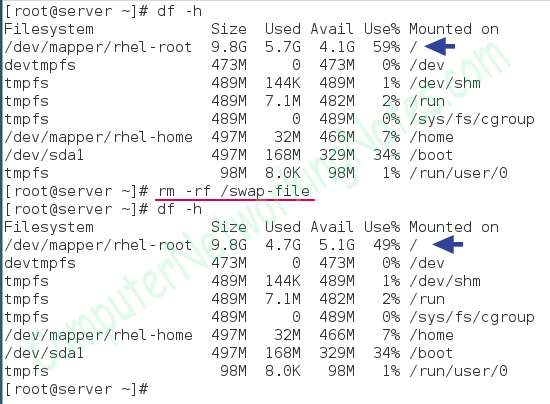 That’s all for this tutorial. In next part we will learn how to create and manage LVM partitions in Linux step by step with examples.