A DNS server, or name server, is used to resolve an IP address to a hostname or vice versa.

You can set up four different types of DNS servers:

Before configuring BIND to create a DNS server, you must understand some basic DNS concepts.

The entire hostname with its domain such as server.example.com is called a fully qualified domain name (FQDN). The right-most part of the FQDN such as .com or .net is called the top level domain, with the remaining parts of the FQDN, which are separated by periods, being sub-domains.

These sub-domains are used to divide FQDNs into zones, with the DNS information for each zone being maintained by at least one authoritative name server.

The authoritative server that contains the master zone file, which can be modified to update DNS information about the zone, is called the primary master server, or just master server.

The advantage of the chroot feature is that if a hacker enters your system via a BIND exploit, the hacker\’s access to the rest of your system is isolated to the files under the chroot directory and nothing else. This type of security is also known as a chroot jail.

In this example we will configure a dns server and will test from client side.

For this example we are using three systems one linux server one linux clients and one window clients.

bind and caching-nameserver rpm is required to configure dns. check them for install if not found install them. 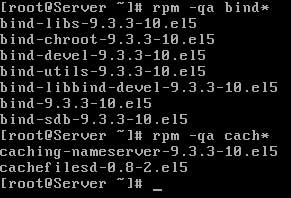 In our example we are creating a new named.conf file

We are using bind\’s chroot features so all our necessary files will be located in chroot directory.
Set directory location to /var/named. Further we will set the location of forward zone and reverse
lookup zone files.

Do editing exactly as shown here in image 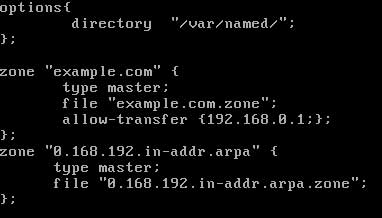 save this file with :wq and exit

We have defined two zone files example.com.zone for forward zone and 0.168.192.in-addr.arpa for reverse zone.
These files will be store in /var/named/chroot/var/named/ location. We will use two sample files for creating these files.

Change directory to /var/named/chroot/var/named and copy the sample files to name
which we have set in named.conf

Change this file exactly as shown in image below

Change this file exactly as shown in image below

Now changed the ownership of these zone files to named group

If service restart without any error means you have successfully configured master name server.

For this example we are using three systems one linux server one linux clients and one window clients.

We have configured master DNS server with ip address of 192.168.0.254 and hostname server.example.com on linux server. Now we will configure slave DNS server on linux clients

First test connectivity from dns server by ping commands and check necessary rpm. bind and caching-nameserver rpm is required to configure dns. check them for install if not found install them.

Do editing exactly as shown here in image in named.conf

save this file with :wq and exit

Now restart the named service. It should be start without any error.

Congratulation you have configured both Master and client DNS server. Now we will configure dns client and test it with dns server. 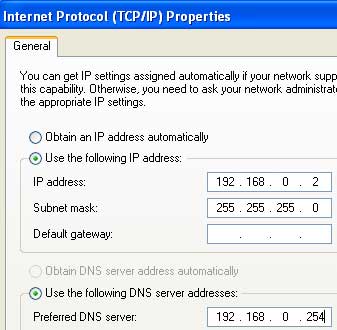 Now go on commands prompt and ping from other client by name to test dns.

Alternately You can also verify DNS server by nslookup command 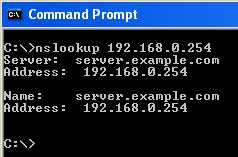 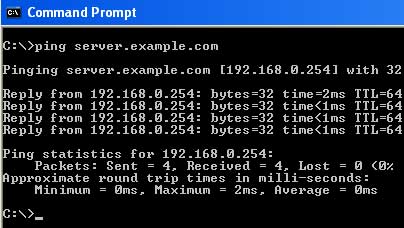 On command line interface you don\’t have any options to set DNS ip in network configuration window. IP of DNS server can be set from /etc/resolv.conf file. Each nameserver line represents a DNS server, and the search line specifies domain names to try if only the first part of a hostname is used. For example, if just the name client1 is used as a hostname, client1. example.com will also be tried if the /etc/resolv.conf file is configured as shown in image below on the system.

now verify by pinging to other client from name